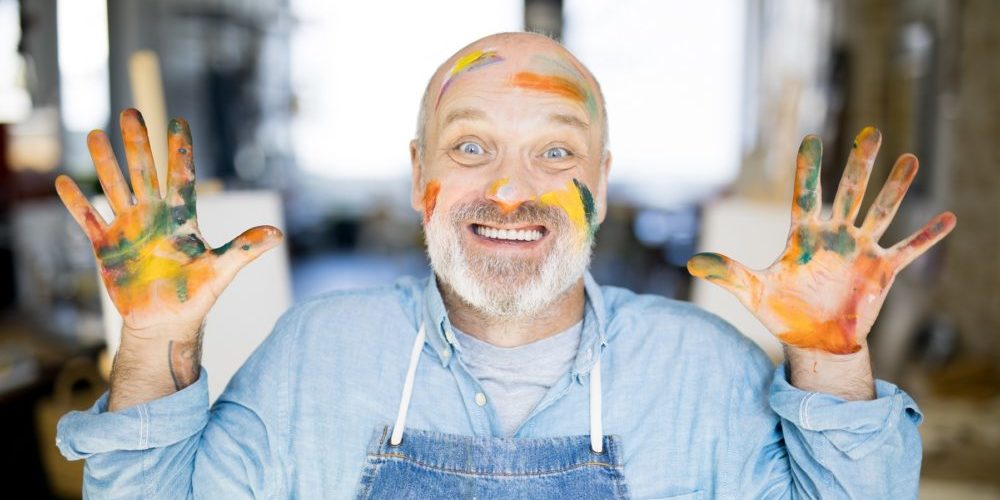 Never too late to create

Science shows that we improve creativity in later years. How do you fancy picking up that paintbrush again?

The Turner Prize has historically always been about celebrating artistic breakthroughs, but up until 2017, the cutoff age for entry was 50. That limit has since been lifted, opening this creative opportunity to anyone.

Since that lift, notably, two older candidates made the cut for the four-strong shortlist in the first year – painter Hurvin Anderson, 52, and leading black female artist Lubaina Himid, 62. Thrillingly, it was Himid who eventually took the prize. She joins the ranks of celebrated artists such as Tracey Emin, Damien Hirst and Grayson Perry. In 2018 46-year-old Charlotte Prodger won the coveted prize – it’s clear the Turner is open for oldies!

The recognition that creativity isn’t restricted to bright young things is no doubt welcome news to the many people over 50 who are regularly wielding their paintbrush or taking part, either for pleasure or profit, in a whole range of other artistic endeavours.

Indeed, there is scientific research to suggest that creativity, rather than declining in later life, can often get stronger. Studies have shown, for example, that changes in the brain as we age make us more open to disparate ideas and more able to make connections between them – a combination which naturally leads to more creativity.

As the brain thins with age, we also become less inhibited and less concerned about impressing others. This encourages us to push our creative boundaries and means we are less worried about seeking ‘approval’ from others for our ideas or creations.

This is something that definitely rings true for cartoonist Sarah Boyce, 52. She found herself drawn to art after a long career in advertising. After an access to art programme and forays into everything from drawing to pottery, she signed up for a course in cartooning – and found her niche. 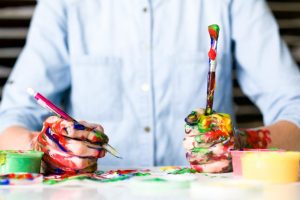 Her pithy cartoons have already been published in Private Eye and The Oldie, and have led to commissions for book illustrations and corporate work. She’s starting to become established – and finding it incredibly fulfilling at the same time.

“When I look back I am amazed I didn’t think of it earlier, but I guess I didn’t have the space in my life or the capacity to give it the time it needed before,” she said.

Sarah believes the confidence that comes with age is a key factor in allowing creativity to flourish. “With cartooning there is a lot of rejection, and I think I would have found that very hard. I would probably have given up in my younger years. Now if I feel I’ve hit the nail on the head with a cartoon, I’m confident enough just to put it out there.”

Print-maker Jane Tonkin, 53, believes the accrual of experience also helps older artists get the creative juices flowing. Jane runs design and communications agency The Shine Studio – but has always continued to work on her own print-making, which she exhibits at a local gallery.

“I think the way I approach my work has definitely changed as I’ve got older,” she says. “I sometimes find myself going back to something I started 10 years ago and looking at it in a different way. It’s because you have that bank of visual memory and information. You can it to use to build on an idea and apply to a new piece of work.”

Of course it’s not just the visual arts that are dogged by the persistent idea that fresh young blood is where it’s at. The literary world is similarly pre-occupied with youth – despite numerous examples of authors who have only been published later in life.

There is scientific research to suggest that creativity, rather than declining in later life, can often get stronger.

Best-selling author Mary Wesley famously had her first novel published at the age of 70. She went on to write another nine, three of which were dramatized for TV. Irish-American writer Frank McCourt, whose autobiographical book Angela’s Ashes won the Pulitzer Prize, was 66. While Richard Adams was 52 when his iconic first book, Watership Down, hit the shelves.

Hope then, for the many of us who are secretly harbouring plans to write that best-selling novel in our retirement. Writer Sonya Chung was so fed up of the publishing world’s pre-occupation with youth that she started Bloom, a website dedicated to championing the work of older writers. “Slow, later, and older produces as great if not greater literary work than fast, early, and young,” she says. She adds that when we label people as ‘late bloomers’ we should be asking the question ‘late according to whom?’.

DO YOU KNOW ABOUT THE U3A?

The University of the Third Age (U3A) has long recognised the importance of creativity in later life. The organisation encourages people to learn from each other, at their own pace. And estimates that there are more than 7,000 arts-based special interest groups across its membership. These groups cover everything from film, jazz and art appreciation to scrapbooking, mixed media and jewellery making.

Chief Executive Sam Mauger says many people find their creative mojo later in life. Often after having had the message ingrained at school that they ‘were no good at art’.

When we label people as ‘late bloomers’ we should be asking the question ‘late according to whom?

She highlights the importance of the feel-good factor that comes from learning a new skill and losing yourself in the moment of creating something. “When you have created a piece you really like, you feel uplifted,” she says “And of course we also know that taking part in the arts generally can help to prevent loneliness and depression because you are building more confidence and making new connections, which helps people feel better about themselves and about life generally.”

Jane Tonkin agrees that it’s important for those who have the creative itch to find ways of scratching it. “As you get older, you tend to be more in touch with what you need to make your life happy and contented. I have to do something creative, otherwise I wouldn’t be well. And I am grateful and lucky that I have been able to find a way to be creative every day.”