Are more people turning from straight to same-sex relationships later in life?

It seems extraordinary perhaps to us now, but homosexuality has only been decriminalised for 50 years. 51, to be precise. And that right up until the end of the sixties, it was still illegal to be gay.

Funnily enough, not so for women – just men. And the illicit nature of same sex relationships through the ages has brought intense loneliness, fear and punishment for immeasurable numbers.

Today, with a far greater balance of equality, same sex partnerships and marriages in the UK mean that whatever your leaning, you have the same chance for a happy ever after as anyone else.

But perhaps as a reaction to the restrictions of the past, it seem to be a growing trend that same-sex relationships may be a bit of a thing for people over the age of 50.

Following the legalisation of same-sex marriages in early 2014, between March 2014 and June 2015 over a thousand same-sex couples aged over 50 entered into the legally binding contract of marriage. Could it be that we are living in a more forgiving culture now with sexual fluidity and experimentation that has freed an older generation to just be themselves?

If you had asked me 10 years ago if I would have ever had a relationship with a woman, I would have said hell no!

Office worker Julie, from Sussex, definitely thinks so. She has been in a relationship with a woman for the past three years after the breakdown of her (straight) marriage.

“If you had asked me 10 years ago if I would have ever had a relationship with a woman, I would have said hell no! But that all changed the day I met Carol. I still do not class myself as a lesbian. I merely fell in love with someone who isn’t a man. The connection was instant, and I knew it was the start of something extraordinary.”

This type of ‘coming out but not coming out’ is a growing trend; with celebrities such as TV presenter Anna Richardson who has been in a same sex relationship with Sue Perkins for the past five years typifying the approach.

For me, it’s just a case of I am who I am. I’m not interested in being labelled gay or straight

Anna has previously spoken about dating a woman after nearly two decades in a relationship with a man stating, “For me, it’s just a case of I am who I am. I’m not interested in being labelled gay or straight, my sexuality is fluid. I just happen to have fallen in love with a woman – simple as that.”

But has Julie encountered any negative reactions to her new relationship?

“I would say 90 percent of my family and friends have been accepting of my new partner. A few took a little longer than others to come around to the idea, but when they saw how happy she made me they embraced us both.”

Society has always been more accepting of sexual fluidity in women than men even though it does occur in both sexes. This seems likely to be due to men traditionally seeing sexual relations in an either/or format, whereas women tend to have more blurred boundaries.

Carol, a writer from South London, can certainly relate to this ‘grey area’ of sexuality.

I’m ready to experiment with a same-sex relationship. I am lucky that in today’s world I will not be judged for this

“I am not sure if I am a lesbian, but I do know that I have had my fill of members of the opposite sex, and I’m ready to experiment with a same-sex relationship. I am lucky that in today’s world I will not be judged for this.

“I want to find someone who I can relate to and who I can communicate with easily. I am sick to death of trying to understand how a man’s mind works; I don’t think I will ever understand them and to be honest I am fed up with trying to.

“I have had sexual encounters with women in my youth, so I am not at all worried about that side of things. In fact, quite the opposite.”

According to Lisa Diamond, psychologist and feminist, who has spent her professional life researching sexual identity and orientation development, this situation is not uncommon in women, and especially in those who are in the later stages of life.

“What we know about adult development suggests that people become more expansive as they get older. In particular women, when they are longer worried about raising kids tend to look back on their marriage or past relationships, and find they have an opportunity to take a second look at what they want.”

With men however, it is often a fear of public opinion and other family members that historically has stopped them from revealing their true sexuality, rather than a sudden desire to explore the opposite sex or from a thunderbolt moment. It seems that later in life – and perhaps with society becoming more inclusive – it’s becoming easier to ‘come out’.

Relate counsellor Clare Prendergast explains, “A lot of older men who were fearful of coming out due to a negative reaction from their parents no longer have this hanging over them any more.”

I always knew deep down that there was something missing in my life, but I tried to bury it

Dan, from Leicester, was married for 32 years to his first and only girlfriend until he came out to his friends and family last year.

“I always knew deep down that there was something missing in my life, but I tried to bury it as I had a good-looking wife and two beautiful children. I think I was mostly worried about what people would say. I am from a working class background and none of my friends or work colleagues were gay. It wasn’t frowned upon, but it certainly wasn’t accepted either.

“I have been overwhelmed with the support from my children, whose only gripes were that I had not confided in them sooner. Even my ex-wife is starting to come around.”

However, there is still a long way to go before the over 50s feel as comfortable about being in a same-sex relationship as their younger counterparts. A study by Stonewall, the UK’s leading LGBT charity, discovered that, “Many of the one million lesbian, gay and bisexual people aged over 55 in the UK feel alone and unable to open up about their sexual orientation.”

Although the help is there, with organisations, charities and blogs specifically for LGBTs aged 50 and over, clearly many people within this age bracket do not feel comfortable reaching out.

If you feel confused, lonely or are being treated unfairly due to your sexual orientation, you are not alone.
For support and non-judgemental advice visit www.stonewall.org.uk 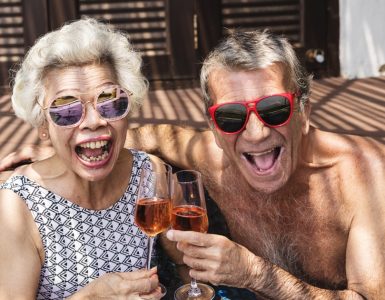 I’d been worried about my intake before we all got shut in anyway. But being at home full time forced me to have a really good look at it. Like many people I’ve been working from home full time, and it’s been a complete...

Tabatha Fabray is a writer and journalist with a passion for living...