I’d been worried about my intake before we all got shut in anyway. But being at home full time forced me to have a really good look at it.

Like many people I’ve been working from home full time, and it’s been a complete lifestyle change. And it’s this lifestyle change that has convinced me once and for all that I want to stop drinking alcohol.

On the one hand I’m really loving the whole aspect of not having to commute every day. And I love not having to get dressed! On the other hand, well, I’m going a bit stir crazy. I’m 62 and staring my retirement in the face too, and not sure how I feel about that either.

My wife and I being home full time together was putting pressure on us too. Our kids are older now, they both left home a couple of years ago. So it’s just me and my wife. It was something we had been looking forward to for years, time for just the two of us.

But honestly, things are different to how we expected them to be.

We have always been great drinking buddies

We’ve always been a sociable family. When my wife and I were younger we were early drinkers, finding pubs that would serve us without asking for ID. And in our youth, we found ourselves very much into the London club scene, and inevitably later the rave culture. Our weekends were one long party, and we lived for Friday nights and the mayhem it would bring!

As we got older and had kids and jobs, we settled down. But most evenings at the end of our working days, we’d open wines and beers and drink together. And drink quite a lot. We’ve had parties, and dinner parties, and house guests, and holidays… and there always seemed to be an excuse to tie one on. We didn’t think much of it. We thought everyone was like us, full of life, one constant party.

Mostly we have had an absolute blast together. Occasionally we’d have a massive drunken fight, something that would get out of hand because of the alcohol. But not violent or anything. And we have been really happy, for years. We were looking forward to re-living our carefree, childless days again! Having fun without the responsibility of kids and so on. Party time in our 60s! Retirement looked amazing!

But something has changed for me

I don’t know what it is, or how to explain it, but over a period of time I’ve felt concerned about my drinking. I – we – drink more than most of our friends. And I was starting to think that maybe we ought to cut back.

When I talked about it to my wife she usually just laughed at me. And then I’d laugh too and we’d open a bottle of something nice and laugh together about how silly I am.

But I’d become sober-curious. And I couldn’t shake the feeling that my own drinking wasn’t actually that healthy, or under control. So using the excuse of doing dry months for various charities I started to do some chunks of time being alcohol-free.

Firstly, I’m going to confess. Stopping drinking was much harder than I thought it would be. I actually felt withdrawal symptoms. Dreadful sugar cravings. Trouble sleeping. Alcohol consumed my constant thoughts – I had to fight it, every single day.

It was a relief to go to bed having made it through another day without buckling. And it was really tough – what they call in sobriety circles, ‘white-knuckling it’. But if anything, it simply made me even more convinced that I had some kind of dependency issue. I wondered if I was an alcoholic.

But the benefits! Oh my word

What I did also notice though, was that after about seven days of not drinking, and getting through that really tough early part, I felt SO MUCH BETTER!

I mean, not just a bit better, but like a different person. Better able to work, to think, to sleep. More ‘present’ in my life. And just so much nicer physically. Not only did I feel healthier and lose weight, I found I had all this extra energy. Where had that been all my life!?

And when the dry months were over, I’d launch myself back into drinking heavily again, but everything had changed. It just didn’t make me happy any more. I felt like I’d seen another life, a life I could have, where I felt like a better version of myself.

The joy of drinking had gone. I felt shifty

I’d drink, but that sense of blithe, carefree drinking without worry about tomorrow was gone. I felt heavy. Woke up feeling sluggish. The joy of drinking had gone. I felt shifty.

So ultimately I made a decision to stop drinking completely

This is where it starts to get sticky. Having made that decision, I told my wife. And at first she was supportive – I think actually she was humouring me. She simply thought I wouldn’t stick to it, and I can’t blame her for that. We’ve had a lifetime of drunken escapades together.

But I did mean it. I do mean it. I joined a group called One Year No Beer and I’m doing really well. Now I haven’t drunk any alcohol for more than nine weeks and I love it! But everything between me and my wife has gone totally haywire.

My wife, having been supportive and proud of me at the start, is really struggling to understand what I’m doing. She feels betrayed by me, left out in the cold. She’d assumed that we’d be having all this ‘fun’ together, and now she simply feels like I’ve let her down. She’s devastated. I can’t overstate how upset she is.

She totally feels like she’s lost her best friend, her partner in crime

Instead of cracking open some cold ones together at the end of the day, or uncorking a fine vintage and turning up the music together, I’m more interested in going for a run. Or doing something constructive.

She totally feels like she’s lost her best friend, her partner in crime. And I really do have sympathy for her. We have had such a fun-filled life together, packed with parties and so many booze-fuelled mad nights – and suddenly her best mate has ditched her. I do get it, I really do.

But it’s causing massive arguments now. In a house where we were aiding and abetting each other, everything was fun. We didn’t care, we lived for the moment, and just one more shot, and turn up the music, never mind the neighbours. In fact let’s invite them round!

Now we are in different worlds. She wants to keep doing that, and I don’t. And I don’t know where we go from here. 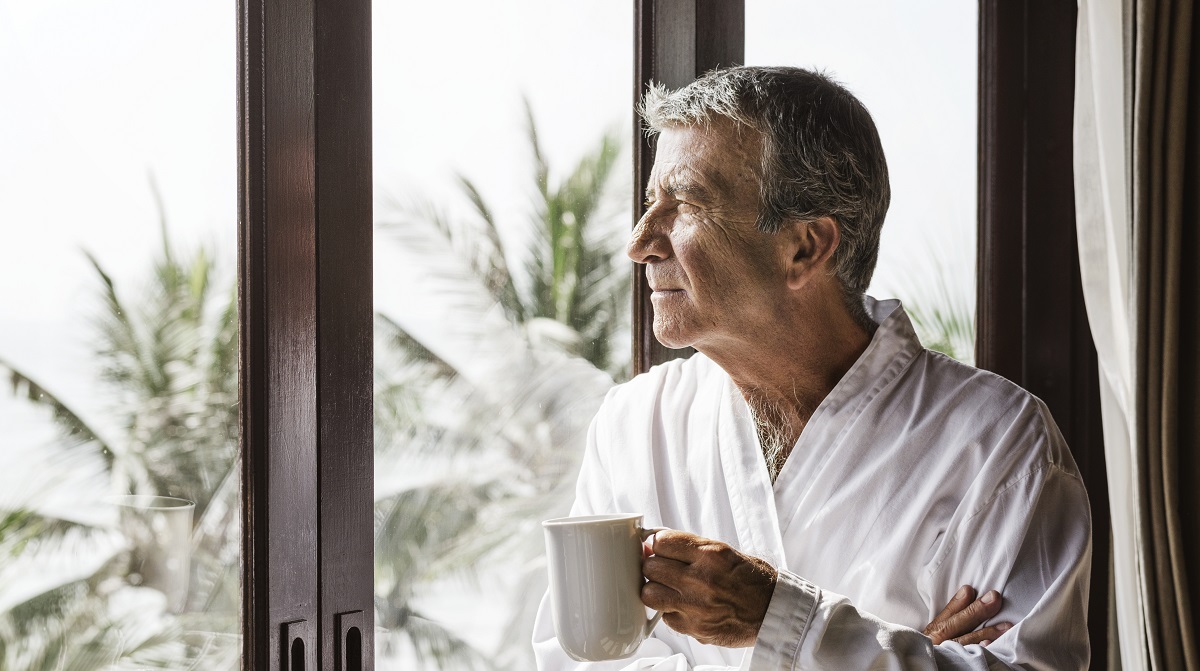 I have really noticed the effect it has on her

I have tried REALLY hard not to be judgmental about this. But with the removal of my rosé-coloured spectacles, I see my wife in a different light. I can’t help it. When we’re drunk together, we’re both hilarious to each other. But now I’m sober, she’s not funny at all. She’s a bit embarrassing and repetitive. I know I’ve been that person too. Jesus, this is so hard.

We are fine for some of the time, but as soon as she’s in about three or four large drinks deep, we’re on different planets. And we both feel it. She gets resentful, starts digging at me. And then I want to escape, get away from her.

We are drifting further apart and she is drinking alone. I find her in the middle of the night, asleep on the sofa where she’s obviously been crying and drinking. And it’s hard not to feel responsible. I don’t know what to do. I realise we have been enabling each other’s unhealthy drinking for decades.

It’s also hard not to look at how much money goes on booze. Wow – I wonder what we could have done with our lives if we hadn’t frittered it away. But I’m working at having no regrets. We have had an absolute blast – it’s just for me, that time is over now.

We’ve had that discussion – several times. Why aren’t we getting on any more. Maybe she could give it a crack too, but she can’t stick to it. Manages a couple of days then gets resentful again, doesn’t see why she SHOULD have to do this just because I am.

And she’s right. It should be her choice, of course it should. But that doesn’t make it any less hard for us to get along.

We try hanging out in the evenings together; me with my 0% chilled beers and her with her wine, but like I said, that’s only fun for either of us for a couple of hours. Then it ends in dissent or discord of some kind.

It feels like our entire relationship and marriage has been based on this crazy alcohol-fueled merry-go-round, and I’ve suddenly jumped off. And whilst she’s still on there, swinging around wildly, filled with dizziness and the heady fun of fear, I’ve found my feet. Firmly on the ground. Stable and comfortable.

Whether we can find another ride that fits us both is the big question now. Because where we are now, I don’t see us lasting. What is the answer?